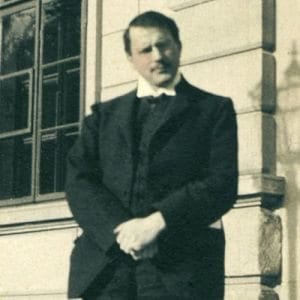 Examining his life and body of work shows how he personifies the qualities of the Myers-Briggs Test INFJ Personality Type.

Carl Jung is best known as a famous psychiatrist who developed psychological concepts like the Archetype and the Collective Unconscious. In fact, the Myers-Briggs Type Indicator is built off of Jung’s theories, but Jung was a student of many fields that brought together his deep understanding of human psychology. He studied Eastern and Western Philosophy, Sociology, Astrology, Literature, and the Arts. His wide knowledge base allowed him to support his internal Intuition process when developing his concepts on the mind and the psyche.

INFJ Personality Types communicate with the outside world using their Feeling function. Understanding others and making decisions is based on a process of applying their values and empathizing with others. In addition, INFJ Types are deeply committed to their values and lead persuasively by sharing their value-driven visions. (Myers, CPP. 1998)

Carl Jung was no exception to this rule. Like other INFJ Types, he wanted his work to have meaning and a purpose. His extensive research and study of the human mind and psyche reshaped the way psychologists approached human psychotherapy.

Carl Jung’s concept of the unconscious varied from the widely subscribed to theories established by his colleague and mentor, Sigmund Freud. Sticking to his beliefs, Carl Jung sacrificed his friendship with Sigmund Freud in the name of preserving his value-driven concepts on the unconscious. It drove a professional and personal wedge between the two men, but it allowed Carl Jung’s vision of Individuation, the Persona, and his new school of Psychotherapy – known as Analytical Psychology or Jungian Psychology – to flourish.

MBTI Test INFJ Types may be known for being compassionate and caring, but when their values are violated or challenged, they don’t hesitate to assert themselves. The Myers-Briggs INFJ Personality Type is known for being insightful, creative, and deep. Actor and Famous Myers-Briggs INFJ Personality Type Al Pacino is most famously known for his portrayals of famous gangsters in the Godfather trilogy, as well as other movies like Scarface, but not everyone realizes his full scope of skills. Al Pacino is a talented stage and screen actor who uses method acting to go deep into his character roles. His talent has been recognized on numerous occasions with multiple Oscar nominations and one Oscar win, as well as numerous Tony Awards for his stage performances. (Myers, CPP. 1998)

MBTI Test INFJ Types are also known for being reserved, yet they have no problem asserting themselves when their values are violated. Al Pacino has identified himself as an Introvert, but he is no stranger to trouble when people cross him. Before he played a gangster on film, he was known for getting into fights at school from time to time and even earned a reputation as a sort of mischief-maker. (Myers, CPP. 1998) Myers-Briggs INFJ Personality Types are known for combining their empathic understanding of people with the organization and drive to implement world-wide plans for improving people’s lives. (Myers, CPP. 1998)

Few individuals personified this quality of the INFJ type better than Famous Myers-Briggs INFJ Personality Type Mahatma Gandhi, who helped lead his people to independence from British rule through nonviolent protest. His ability to connect and inspire the masses to change the world was uncanny. He understood people, as well as the difference between reaching one’s goals through love versus force. This is well illustrated when he explains the two forms of power, “Power is of two kinds. One is obtained by the fear of punishment and the other by acts of love. Power based on love is a thousand times more effective and permanent then the one derived from fear of punishment.1 “

The MBTI Test INFJ Type is also oftentimes seen as cool and composed, but they don’t hesitate to assert themselves when their values are violated. Upon initial inspection, Mahatma Gandhi doesn’t look like an individual that could change the world and bring the mighty British Empire to its knees, but even through numerous imprisonments and threats, Mahatma Gandhi stuck to his message and refused to stop his crusade to gain independence for his people. (Myers, CPP. 1998)